For motorcyclists and motorcycle racing enthusiasts 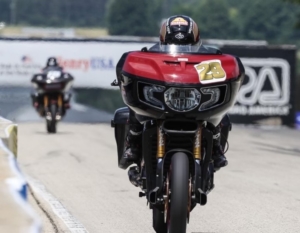 Veteran rider, and inaugural King of the Baggers winner, Tyler O’Hara discusses how the event has grown, riding the S & S Cycle Indian Challenger, and his role in developing the bike. He shares how being present and in the moment has been a winning strategy, and includes tools like yoga, meditation, goal setting and visualization. Tyler also tells us who his toughest competitor is, and if he’ll compete in flat track this year!

MotoAmerica is the OFFICIAL Sponsor of Pit Pass Moto!

MotoAmerica, home of AMA Superbike and North America’s premier motorcycle road racing series, is thrilled to announce that it will partner with Daytona International Speedway to host one of the world’s most prestigious races – the DAYTONA 200 – during the weekend of March 10-12, 2022, in Daytona Beach, Florida. The 80TH running of the DAYTONA 200 will feature increased competition from more manufacturers and an international contingent of racers coming over to battle with America’s best for the $175,000 in prize money that’s up for grabs. .

In addition to the DAYTONA 200, the MotoAmerica weekend at Daytona International Speedway will be the opening round of the 2022 Mission MotoAmerica King Of The Baggers Championship, marking the first time Baggers will race on the high banks of a Superspeedway with speeds expected to exceed 160 mph, and also the first round of the Twins Cup Championship. Joining the Baggers and Twins Cup will be the ever-popular Roland Sands Super Hooligan national championship. All three classes will run two races during the Daytona 200 weekend.

Tickets are on sale now at www.daytonainternationalspeedway.com or by calling 1-800-PITSHOP

Get your PPM swag at our NEW Pit Pass Moto online store!

MotoAmerica is a signature sponsor and partner of Pit Pass Moto. Hear from champions of Superbikes on the podcast, and keep track of the race schedule right here.