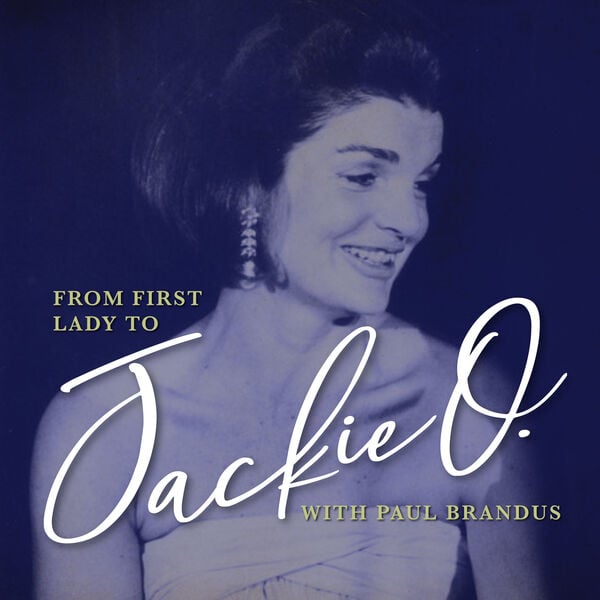 Go to From First Lady to Jackie O

A companion podcast to the book "Jackie" by Paul Brandus

Everyone knows Jackie Kennedy Onassis was married to two of the 20th century’s most powerful men, but lesser known are the five incredible years between those marriages when she was on her own.

If you stood the handsome and charming President John F Kennedy next to the squat and abrasive Greek business tycoon Aristotle Onassis, you might assume they had nothing in common— but in fact, they were both wealthy, hyper-competitive, and big time womanizers, stopping at nothing to get whatever—and whoever— they desired. And Jackie, always razor-sharp, saw all of this... and was attracted to it.

“FROM FIRST LADY TO JACKIE O”

NEWSREEL AUDIO: “From the tiny chapel on the Greek island of Skorpios, the first public appearance of Mrs. Aristotle Onassis, of course the former Mrs. Jacqueline Kennedy, widow of the late president. The millionaire ship owner and his bride seemed oblivious of the pouring rain and the persistence newsmen alike.”

PAUL: The world was shocked when Jacqueline Kennedy married Aristotle Onassis on Skorpios — the Greek tycoon’s private island in the Ionian Sea. The newspaper headlines — vicious and full of betrayal:

“The Reaction Here Is Anger, Shock and Dismay” — said the New York Times.

“Jackie, How Could You?” asked a Stockholm paper.

But worst of all: Il Messaggero — an Italian paper — its headline “JFK Dies a Second Time.”

It was October 1968. Not five years since the assassination of Jackie’s first husband, President John F. Kennedy... and barely four months since her brother-in-law Robert F. Kennedy was himself gunned down in Los Angeles, moments after winning California’s Democratic presidential primary.

Two Kennedy assassinations — in four-and-a-half years. Both shocked America and devastated Jackie to the core. The first murder robbed her of her husband — the second drove her into the arms of another.

I’m Paul Brandus — you’re listening to “Jackie” — a podcast about my book that explores Jacqueline Kennedy’s life from November 1963 to October 1968 — her transition from First Lady to Jackie O.

Now, if you stood John F. Kennedy and Aristotle Onassis next to each other — you might have thought— these guys have nothing in common. After all, JFK was tall, sophisticated, charming. He looked like a movie star — and his quick wit made women swoon. Onassis, on the other hand, was short and squat, it was said he had had the face of a gangster. He came off as greedy and abrasive.

These descriptions for both men were true. But now — consider the similarities. They were wealthy, hyper-competitive, and power-hungry. They were super confident — big time womanizers, stopping at nothing to get whatever— and whoever—they desired. I said that Kennedy was smooth in public — a Pulitzer Prize-winning author and one of the most eloquent speakers of the 20th century.

But in private — he could be crude and vulgar. As for Onassis — well, here’s what one Jackie biographer Sarah Bradford says:

“He was hideous, physically, but he had enormous magnetic charm.”

That charm, and a true zest for life — came through easily with Onassis — and not just in Greek, but English, French and Spanish, sophisticated languages in which Jackie was ALSO fluent. Onassis could skin you alive in a business deal by day — but then at night talk for hours about art, music, poetry.

So both men — JFK and Onassis — for all their outward differences, had a lot in common. And Jackie — always razor sharp— saw all of this. And was attracted to it.

Meantime, get this: the Kennedys had known Onassis for years — dating way back to the early 1950s, when they all got together on Onassis’s extravagant yacht — it was called the Christina — when it was docked in Monaco. I asked Clint Hill — Jackie’s longtime Secret Service agent — about this:

CLINT HILL: “THE FIRST TIME THEY MET WAS IN THE 1950S WHEN KENNEDY WAS A SENATOR AND SHE AND HE WERE IN MONACO - AND THE CHRISTINA WAS IN MONACO AND PRIME MINISTER CHURCHILL WAS ON BOARD. A FRIEND OF ONASSIS - JOHNNY AGNELLI, WHO OWNED FIAT FROM ITALY - AND HE KNEW THE KENNEDYS AND PRESIDENT KENNEDY WANTED TO MEET CHURCHILL AND HE ARRANGED THROUGH AGNELLI TO GO ON BOARD THE CHRISTINA WITH MRS. KENNEDY AND MEET CHURCHILL. THAT’S THE FIRST TIME THEY MET ONASSIS.”

We’ll be hearing a lot from Clint Hill throughout this podcast — you’ll find him to be a remarkable man. While JFK chatted with Churchill, Onassis gave Jackie a tour of the ship — it was luxury personified. Onassis even had bar stools that were upholstered with skin from a whale’s penis — and he enjoyed telling the women that AFTER they sat down.

Jackie found this and other things — like murals of naked women — to be gaudy. But being the diplomat that she was, she said “Mr. Onassis, I have fallen in love with your ship.”

According to one biographer of Onassis, the Greek tycoon seemed to be attracted right off the bat— telling an aide quote — “There’s something provocative about that lady. She’s got a carnal soul.” But after that initial meeting — it was years before they’d see each other again — and for Jackie, it took a deep family tragedy...

But after that initial meeting — it was years before they’d see each other again — and it took a deep personal tragedy...

But first, this message.

Welcome back — you’re listening to “Jackie” — a podcast about my book that explores Jacqueline Kennedy’s life from November 1963 to October 1968 — her transition from First Lady to Jackie O. We were talking about the first time Jacqueline Kennedy first met Aristotle Onassis in the early 1950s. They wouldn’t see each other again until the Fall of 1963 — years later. It took a deep tragedy:

NEWSREEL: ”Though the prayers of millions accompanied him as he was rushed from his Cape Cod birthplace to the Boston Children's Hospital, the newborn son of President and Mrs. Kennedy is dead, the victim of a lung ailment that made it impossible for him to continue breathing."

The newsreel didn’t mention the son’s name, but it was Patrick Bouvier Kennedy — he lived just two days. The boy’s death sent both President and Mrs. Kennedy into mourning. Now here’s where Aristotle Onassis comes in. It’s a bit complicated - almost like a soap opera.

Jackie’s sister Lee was married to a Polish nobleman — Stanislaw Radziwill — everybody called him “Stash” for short. But that didn’t stop Lee from having a high-profile affair with Onassis. So after Patrick Bouvier died, Jackie was deeply depressed. Her sister Lee called her and said a Mediterranean cruise might cheer you up — come with us on the Christina — again — that was the Onassis yacht.

Now — Jackie had been to Greece in 1961 — but President Kennedy made sure she did NOT cross paths with Onassis — but now, he decided it was OK. So off Jackie went. And Clint Hill went along.

HILL: THE PRESIDENT HAD APPROVED HER GOING ON BOARD THE CHRISTINA BECAUSE SHE WAS SO DEPRESSED ABOUT THE DEATH OF YOUNG PATRICK. AND HE WAS ON BOARD THE CHRISTINA WHEN WE WERE ON THERE AS WERE TWO OF HIS SISTERS AND FDR JR. AND HIS WIFE AND PRINCESS RADZIWILL (LEE), A GREEK ACTOR AND HIS WIFE AND PRINCESS IRINA GALATZINE AND MYSELF AND ONE OTHER AGENT, AND HER PERSONAL ASSISTANT PROVIDENCIA PAREDES.

So there was Jackie and her sister Lee — the mistress of Onassis, and the rest of the group — and they had a great time — sailing around, eating incredible food, ritzy shopping. The whole thing was off-the-charts glamorous.

But back at the White House, President Kennedy was worried about how all this would look — after all, HE was running for re-election in 1964 and Jackie’s trip did get some bad press. So when Jackie returned on October 17, JFK felt he could get away with asking Jackie for a favor:

I need some help in Texas next month, he told her — why don’t you come with me? So Jackie opened up her red leather appointment book, flipped to the third full week of November and scribbled TEXAS across 21st, 22d and 23d.

When this was announced to the press — it was a BIG deal. After all Jackie rarely went on political trips with her husband — and since the 1960 election had never been West of the Mississippi — and she had never been to Texas, period.

And that’s how Jacqueline Kennedy wound up in Texas, in Dallas, on Elm Street — in the back of X-100, the famous midnight blue 1961 Lincoln Continental on Friday November 22, 1963.

Now before we move on, it’s worth remembering that Jackie was apprehensive about Dallas. It wasn’t exactly JFK’s favorite place, either. In fact — and talk about an eerie irony, he talked about Dallas a year earlier with John Connally — who would ALSO be in the car — that fatal day.

JFK: ”By god, I watched that with interest and saw you were running ahead of us, so I knew you were in!"

In this November 7, 1962 phone call — Connally had just been elected governor of Texas — and President Kennedy called him. They discussed the election — and the topic soon turned to Dallas.

JFK: "60 thousand votes... hell, they're talking to be about having that federal building

up there, I don't know why we do anything for Dallas.”

CONNALLY: "I'm telling you, they just murdered all of us.”

“I don’t know why we do anything for Dallas?”

That phone call sends a shiver down my spine every time I hear it — talking about getting murdered in Dallas? Unbelievable.

The day the president was murdered, Onassis was in Hamburg, Germany — inspecting a new tanker for his shipping fleet. Lee Radziwill — Again, that’s

Jackie’s sister — she called Ari and said “please come to Washington. And he did — and stayed in the White House — that very weekend. As the martyred president’s body lay in the East Room, Aristotle Onassis was right upstairs. His proximity to the widow — in her darkest hour — can be considered foreshadowing — and over the next five years, the Greek tycoon kept such a low profile that he referred to himself as “the invisible man.”

Jackie herself once called him - quote — “a strange man,” and a “rogue.” But she also said — quote “He was so understanding. I was fascinated by him from the beginning.”

In our next episode...

It was the sound that Jacqueline Kennedy was desperate to forget...

Thanks for listening — and I hope you’ll check out my new book on Jackie’s between her two marriages — it’s called — “Jackie: Her Transformation from First Lady to Jackie O.” And if you’re enjoying the show, make sure to leave us a review on Apple Podcasts to help other history fans find the show. “Jackie” is a production of Evergreen Podcasts. My special thanks to producer Hannah Rae Leach, sound designer and engineer Sean Rule-Hoffman, and executive producers Michael DeAloia and Gerardo Orlando. Show theme music is by Josh Perelman-Hall.

Visit evergreenpodcasts.com to access a transcript and get more info on the show.

From First Lady to Jackie O Jan 20, 2021 | S:1 E:10
The assassination was now four years in the rear view mirror and she was in a new relationship. She was happy and life was good... but not for lon...
Listen to Episode 10: Shattered Again

Episode 9: A Brush with Death

From First Lady to Jackie O Dec 23, 2020 | S:1 E:8
For Jackie, looming publication of "The Death of a President" would bring new troubles and the first dent in her once untouchable image....
Listen to Episode 8: The Lioness