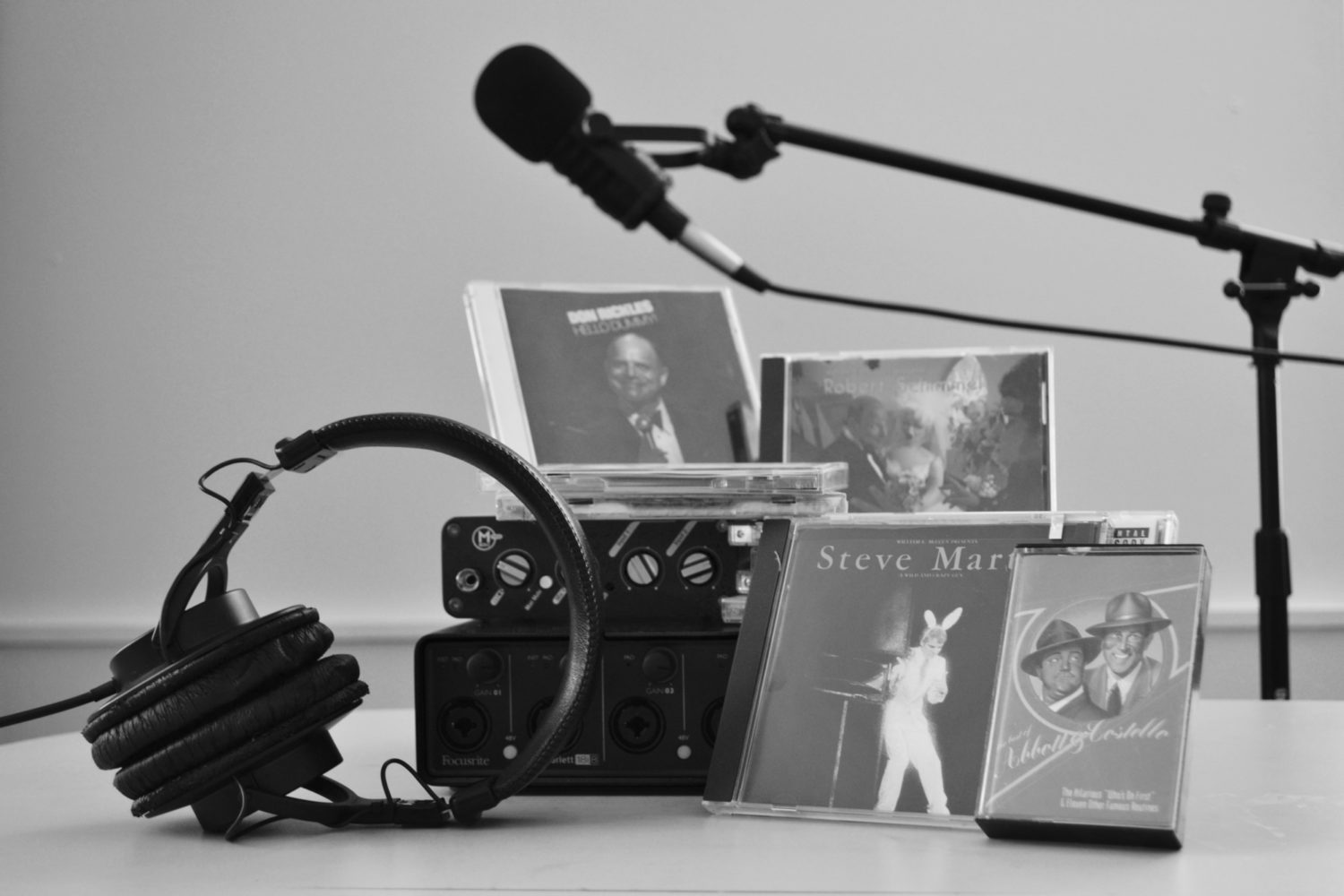 Evergreen Podcasts is extremely excited to introduce its newest podcast show all about comedy, called What’s So Funny! This show was originally recorded as a radio program which aired from 2006-2008. It is now being re-released as podcasts in a seasonal format. The host of What’s So Funny! is Dave Schwensen, a former television talent coordinator in Los Angeles and New York, author of How To Be A Working Comic, and comedy coach for The Improv comedy clubs in Chicago, Cleveland and Tampa.

Dave interviews a different rising or established comedian in each What’s So Funny! episode. During this interview, Dave and the guest comedian talk about how the comedian got his start, discuss tips of the trade, and listen to bits of his personal stand-up performances as well as those of the comedy greats.

In each episode, the guest comedian is asked to discuss his personal comedic influences. The comedian might discuss the role Robin Williams played in his decision to pursue his comedy dreams. Or he might talk about how he admires Bob Newhart and aspires to be a renowned comedian like him. He then plays several stand-up clips from his favorite comedian influence(s), and a discussion between he and Dave ensues regarding what makes these clips so great and memorable.

Ask any comedian to name the comedians who have influenced his work, and you might get more of an earful than you bargained for. From the all-time comedy greats to lesser known comedians, comedy is one of those industries where people can really learn and grow from their predecessors and play off each other.

In this way, you could say that modern comedy is, essentially, “modified” from earlier comedy; all comedy borrows from other comedy and evolves over time. Merriam-Webster defines “modify” in this way: “to change some parts of (something) while not changing other parts.” In this sense of the word, this definition can apply to modern comedy. However, in another sense of the word, “modify” is defined as: “To make less extreme, severe, or strong.” I would argue that in this sense, modern comedy is not modified, for comedy has not exactly become less severe throughout its history. In fact, I think that, if anything, comedy has become more extreme, for comedy is the only place where just about anything goes! From political incorrectness to lewd humor and jokes about religion, gender, and sex, it is hard to find comedy that is not offensive in some way these days! (Although there are still plenty of good, clean comedians out there--like the comedians on our show!)

A comedian’s personal role models are determined, in some part, based on his or her age. For example, a younger comedian might be more influenced by Steve Martin or Eddie Murphy than by comedians such as George Carlin or David Brenner. However, there are certain comedians, such as Lucille Ball or the Marx brothers, who are so classic and who truly paved the way for all comedians, that they have influenced or are admired by practically everyone.

There are more comedians than ever before in modern society (thanks mainly to the rise of television), which has both positive and negative outcomes. On the one hand, it means more talent, more entertainment, and more comedians to discover; however, it also means that there are more comedians to sift through in order to find the truly good ones. These days, especially, comedy has been revolutionized by the fact that virtually anybody can become an overnight internet comedy sensation, due to social media and online outlets such as YouTube. Comedians such as Bo Burnham, Liam Kyle Sullivan, and Brooke Brodack never would have entered the scene if it were not for their YouTube followings.

However, the internet has not quite overrun classic television programs, for there are many modern comedians who we know primarily due to their TV fame from shows like “The Office,” “Parks and Recreation,” “Modern Family,” and “Unbreakable Kimmy Schmidt.” Furthermore, other comedy giants, such as the now super-famous Louis C.K., owe much of their success to Saturday Night Live. SNL has been a “fertile breeding ground for great comedic talent,” with stars like Eddie Murphy, Tina Fey, and Will Ferrell getting their starts on this long-running NBC show.

And what do all of these comedy greats have in common? They were all influenced by other comedians! Nobody can truly claim to have completely original material, without having been formed in some way by his or her comedic predecessors.

Jerry Seinfeld is arguably the most influential comedian in regards to modern comedy and culture. Seinfeld provided the beginning of an appreciation for stand-up because he showed the other side of stand-up; it became more than just a performance, and more so a way of life. He lent a certain amount of authenticity to the stand-up industry, for he was a stand-up comedian who acknowledged and talked about (and made fun of) the fact that he was a stand-up comedian. As “Vulture Magazine” writer Jesse David Fox puts it:

"Modern comedy fans want to see a comedian talk onstage like they do offstage, or at least how Seinfeld showed us they do offstage. Often that means talking about jokes, not just telling them."

With Seinfeld, the “comedian” became more transparent. He became a certain kind of artist who had to craft his own work, who had to work hard and create an interest in his particular “craft.” Fox goes on to explain how Seinfeld’s stand-up acts themselves are no longer at the forefront of comedy; nonetheless, Seinfeld will always be a legend because he made comedy more attainable, more “real.”

And this is where What’s So Funny! comes into play. As Fox explained, today’s audiences are looking for transparency with comedians—they want to hear them talking about jokes offstage and not just telling them onstage. And this is exactly what the guest comedians on the podcast do. They discuss their personal comedy strategies, those strategies they have adopted and adapted from their predecessors, and they open up to the host and to the audience in a real, authentic, unscripted way.

And trust me—it is not boring. It is far from it, in fact. The comedians featured on What’s So Funny! prove that they are not just guys who can tell a joke on a stage. As we see with Seinfeld, people want to know that a comedian is just as funny offstage (or offscreen) as he is on. They want to know that he is not a try-too-hard phony. The host, Dave Schwensen, does not ask the comedian he is interviewing to put on a whole show right then and there on the podcast, but he does get him to open up in a hilarious, raw way. He wants to get to know the person and to understand his style of comedy and where it comes from—that is, where he gets his inspiration.

And just where are modern-day comedians deriving their inspiration? Who are they aspiring to be and looking to for guidance? What’s So Funny! is exactly the kind of podcast all fellow comedians and comedy lovers have been waiting for—it’s smart, hilarious, real, and deep in a way that is simply unprecedented for a podcast.

Be sure to give us a listen and share us with your friends!