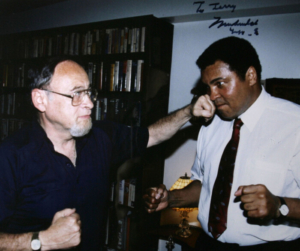 If you want stories about Muhammad Ali, you go to Jerry Izenberg. We did, and now you’ll hear tales about Ali in this episode that you’ve probably never heard before. Izenberg’s career in sports media is so special we’re presenting a two-part episode with him. He’s 91 and still writing as columnist emeritus at the Newark Star-Ledger in New Jersey, where he was hired in 1951. We’ll cover his entire career in part 2, but this first episode with Izenberg is devoted entirely to his relationship with Ali. Jerry covered more of Ali’s fights than any sportswriter, dating to their first meeting at the 1960 Olympics in Rome. He takes us inside the vicious rivalry between Ali and Joe Frazier, including a ringside seat at their brutal Thrilla in Manila. Jerry gives us an inside look at the Rumble in the Jungle when Ali reclaimed his heavyweight championship with an upset of George Foreman in Zaire. He also puts us in Las Vegas on that sad night when Larry Holmes beat up his old friend. Hear this and much more about The Greatest from one of the greatest sportswriters ever. And don’t forget to join us for the upcoming part 2.

Jerry Izenberg is one of only two sportswriters to cover the first 53 Super Bowls, from 1967 to 2019. He also covered 55 consecutive Kentucky Derbies, as well as five Triple Crown winners. He covered more than 40 World Series, nearly 30 NBA Finals, countless golf majors, and sporting events in 10 countries. He spent a day with Nelson Mandela, was courtside when Willis Reed limped onto the Madison Square Garden court in 1970, and covered Pele’s final game at the Meadowlands in ‘78. And, of course, there is boxing, which he has covered since the 1950s. Name a big fight, and Jerry was probably there typing on deadline.

Izenberg has been inducted into 16 Halls of Fame, including the National Sportscasters and Sportswriters Hall of Fame, the Boxing Hall of Fame, the Sports Hall of Fame of New Jersey, and the New Jersey State Literary Hall of Fame. In 2000, Jerry received the Associated Press Red Smith Award for Lifetime Achievement, which is awarded for outstanding contributions to sports journalism. Among his many other honors are the Kentucky Derby Julep Cup for best Derby coverage, the Nat Fleischer award for Excellence in Boxing Journalism, and the 2010 Humanitarian Awards from the American Conference on Diversity and the Award of Excellence from the Thurgood Marshall College Scholarship Fund.

His career in journalism began in 1951 at The Star-Ledger in his hometown of Newark, N.J.. He started as a copy boy making $6 a night while he was still a student at Rutgers University. Within two months, the paper made Jerry a writer. After serving in the Korean War, he became a sports reporter for the Patterson Evening News in New Jersey from 1954-57. Jerry then rejoined the Star-Ledger before moving to the New York Herald Tribune in 1959. He returned to the Star-Ledger in 1962 as the lead sports columnist and never left. His column is the longest continual running sports column in the Greater New York Area. Izenberg wrote five columns a week for more than 36 years before cutting back to four per week in 1999.

In addition to his newspaper career, Izenberg created the “Sports Extra” television show in the 1970s, which ran for eight years. He hosted the radio show “Sports with Jerry Izenberg” on the NBC network in the 1980s. He has been the writer, narrator or producer (sometimes all three) of 35 network television documentaries, one of which – “A Man Called Lombardi” – earned an Emmy nomination. Izenberg has also been a consultant for ESPN for several years. Izenberg is often seen on HBO and the BBC as well as heard on Irish Radio. He’s a prominent voice in Ken Burn’s four-part documentary film about Ali that premiered on PBS in September 2021.

Jerry has written hundreds of magazine pieces. He’s also authored 17 books. His best-seller “Once There Were Giants: The Golden Age of Heavyweight Boxing” was re-released in paperback in 2021 to coincide with the golden anniversary of Ali vs. Frazier I. In October 2020, he published his first novel at age 90, “After the Fire: Love and Hate in the Ashes of 1967” about an interracial love story between a Black girl and Italian boy set in the aftermath of the Newark Rebellion.

Although he retired from daily work at The Star-Ledger in 2006, Izenberg still writes for the paper and its website, nj.com, from his home in Henderson, Nev., near Las Vegas, where he lives with his wife, Aileen. Jerry graduated from Rutgers University in 1952 with a Bachelor of Arts degree and has been awarded honorary doctor of humane letters degree from two other universities.

Evergreen Podcasts Jan 19, 2022
Rick Telander is curious by nature, and his drive to learn more through reporting and relationships has served readers well for five decades.
Listen to Rick Telander: Going Beyond the Surface

Evergreen Podcasts Dec 8, 2021
For Bonnie Ford, being a sportswriter is about more than covering games and knowing statistics.
Listen to Bonnie Ford: Viewing humans through a sports prism

Evergreen Podcasts Nov 24, 2021
Details always caught the eye of Timothy Smith during his three decades as a sportswriter.
Listen to Tim Smith: “That’s a two-mile cookie.”

Listen toWaiting for Next Year
Listen to