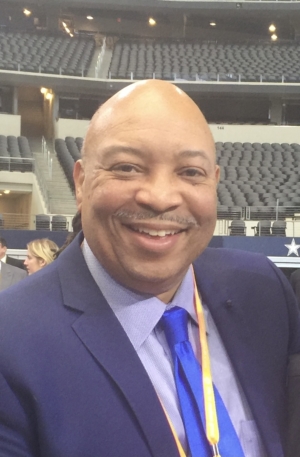 Details always caught the eye of Timothy Smith during his three decades as a sportswriter. Small moments often revealed bigger things about his subjects. Tim recounts how the discipline of Evander Holyfield fueled the fighter’s confidence and warrior mentality. Oh, and hear what Holyfield shared with Tim about why he knew he’d beat Mike Tyson. Tim tells us about experiencing the wild range of Tyson’s emotions, and what it was like to spend three hours with Muhammad Ali. The Champ levitated. Seriously. Hear what it was like in the Bahamas when Orlando Hernandez came ashore after El Duque fled Cuba. Eggs were involved. And let Tim tell you about the babysitting skills of Sam Wyche . . . and much more.

Smith spent the bulk of his sportswriting career in New York City. As a columnist at the New York Daily News from 2000 until 2013, he wrote about boxing, the NFL, the NBA, and Major League Baseball, with an emphasis on the Big Apple’s pro teams. During that time, Smith also regularly appeared on Daily News Live, a roundtable TV sports talk show on SportsNet New York. Tim was a sports reporter for the New York Times from 1990 until 2000. He covered the New York Jets as a beat, as well as the NFL. He also covered professional boxing for The Times.

Before heading to New York, Smith worked at the Cincinnati Enquirer from 1987 until 1990. He served as a beat reporter covering the Cincinnati Bengals, and he also wrote about Ohio State football, Kentucky basketball and professional boxing. His career began at the Atlanta Journal-Constitution, where Smith first worked while earning a journalism degree from the University of Georgia in 1982.

Smith is the Vice President of Communications for Haymon Sports, a boxing management company that is home of the Premier Boxing Champions series. He is also the author of the book “Lou Duva – A Fighting Life” about the career of the Hall of Fame trainer and manager who built the boxing promotion empire Main Events. Duva worked with 19 world champions – including Holyfield and Lennox Lewis – and in the corners of title fights on six continents over 50 years.

Evergreen Podcasts May 11, 2022
Vito Stellino has been writing about the NFL since the players needed off-season jobs to make a living....
Listen to Vito Stellino: “I was Lucky to be in the Right Place at the Right Time.”

Jarrett Bell: Getting personal with the NFL

Evergreen Podcasts Apr 27, 2022
Jarrett Bell has been writing about the NFL since 1981, including the past 29 years as a national columnist for USA Today....
Listen to Jarrett Bell: Getting personal with the NFL

Malcolm Moran: “So Reggie is holding court before the game . . . “

Evergreen Podcasts Mar 30, 2022
My motto: Any time spent with Vahe Gregorian is time well spent. You’ll enjoy this hour with the sports columnist for The Kansas City Star as he s...
Listen to Vahe Gregorian: “What do I do With This?”